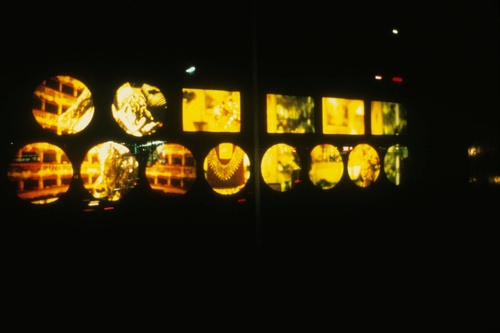 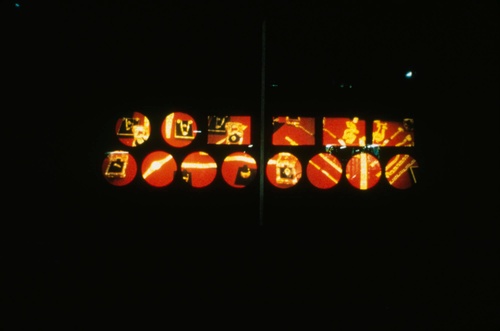 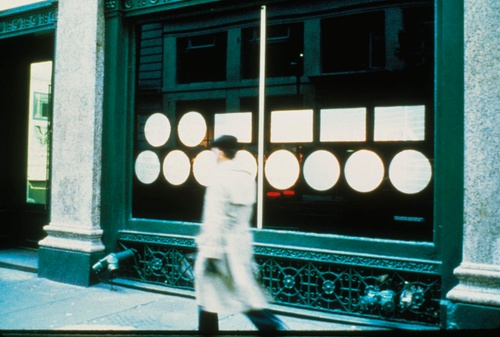 Exhibitions
Richard Baim: Uh Oh
For his window installation, artist Richard Baim continued his investigations into social and political issues in the context of mass media. Since the late 1970s, he had based his performance/sculptures on both the traditional son et lumiere (sound and light) framework usually employed for touristic presentations, and a more recently developed corporate exposition. The context of Baim’s works was often devoted to representations of masculine power and authority by juxtaposing images of public monuments, heroic figures — such as bullfighters or corporate executives — and military displays of parading personnel or battleships and artillery. Alienation was another theme important to Baim, who stated that “when all of the displays touting bright futures of leisure time and bountiful harvest have been assimilated, the attendee must withdraw into his/her own insufficient world.”

Baim had exhibited both still photographs and installation pieces in numerous group and solo exhibitions, including "Rise and Fall,” at the Institute of Contemporary Art in Boston in 1986; “Man in the Street,” at the Rotunda Gallery in Brooklyn in 1984; and “Watch and Wait,” at Artists Space in 1982.