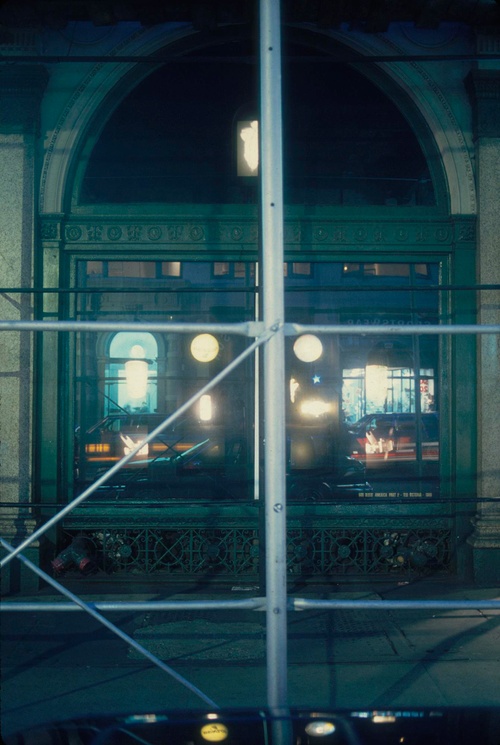 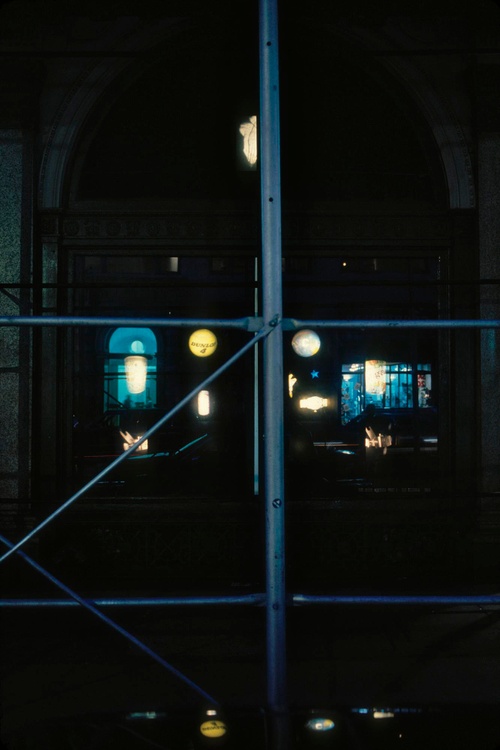 Exhibitions
God Bless America, Part II
In Ted Victoria’s early work, the distinction between spaces is confounded and made static through the artist’s experimental use of camera obscura. These projections collapse inside and outside and conjure implied narratives from smooth, shimmering surfaces. God Bless America, Part II is a departure from this method, however; “[i]nstead of implied narratives, the newer works offer an ambivalent analysis—a sober but distracted and strangely skewed meditation on the technologies and iconography of American mass culture.
With its five arched, architectural niches, arranged in two tiers, God Bless America, Part II echoes the form of multi-paneled Medieval altarpieces, in which each arch contains an image of a saint, or a key scene from scripture. In particular, the saturated, literally shimmering colors of the projections and the allegorical inflection that the composition gives to commonplace objects, recalls altarpieces of Northern Europe, such as the great, often reproduced Ghent Altarpiece (the Adoration of the Mystic Lamb) of the van Eycks. These large, unfolding altarpieces had their origin as a screen for the reliquary, where sacred relics were preserved behind locked doors, just as Victoria’s objects are concealed by the facade.
Each niche in God Bless America, Part II represents a ‘station,’ implicitly cross-referencing the Christian stations of the cross with contemporary television culture. From the left, Stations 1 through 3 present ‘Take Out,’ ‘C'mon Play Ball,’ and ‘Home Shopping Club,’ while Station 4 proposes ‘Let’s Eat’ in the figure of an unopened tin can. Traversing all four fields, a handheld can opener taunts and teases those desires elicited by the niches’ several iconic objects—a selection that implies a range running from the thirst for absolute knowledge to the lust for video commodities—a Eucharist (‘Let’s Eat’) and to the loss therein of the real goods, their transubstantiation into the fabric of representation.