For the next several months, she conducted a scripted online performance via her Instagram and Facebook profiles. As part of this project, titled Excellences and Perfections, Ulman underwent an extreme, semi-fictionalized makeover. She pretended to have a breast augmentation, posting images of herself in a hospital gown and with a bandaged chest, using a padded bra and Photoshop to manipulate her image. Other elements of the makeover were not feigned; she followed the Zao Dha Diet strictly, for example, and went to pole-dancing lessons often.

Through judicious use of sets, props, and locations, Excellences and Perfections evoked a consumerist fantasy lifestyle. Ulman’s Instagram account is a parade of carefully arranged flowers and expensive lingerie and highly groomed interiors and perfectly plated brunches. These images are excessive, but also believable—because they’re so familiar. For many privileged users, social media is a way of selling one’s lifestyle, of building one’s brand. And Ulman went to great lengths to replicate the narrative conventions of these privileged feeds, from her use of captions and hashtags (#simple, #cutegasm), to the pace and timing of uploads, to the discerning inclusion of “authentic” intimate or emotional content (a photo of a lover or a moment of despair).

Critic Brian Droitcour has described the rise of social media as a rebalancing of image-making power: the “aestheticization of everyday life in social media…has leeched the authority of image-making from mass media and from art.” In an important shift, social media has given far more people than ever before the means to self-publish.

At the same time, though, the power relations on social media simply mirror those at play in the world at large. Powerful, savvy people are powerful, savvy social media users. Even while power is leeched away from traditional mass media and the established art world, social media too often reproduces or even amplifies the same kinds of cultural values seen in those spheres. As artist Hannah Black has written, “Once, only the professional Hot Babe adorned all major media outlets; now social media makes of everyone a Hot Babe, should they be willing.”

In response to these conditions, Ulman conceived of Excellences and Perfections as a “boycott” of her own online persona. For three months, she allowed her profiles to be exactly what social media seems to demand—that she be a “Hot Babe.” As a result, she garnered the support of other women who had endured similar makeovers or procedures. She earned criticism for seeming to promote retrograde physical ideals, she was the target of cheap flattery, vulgar propositions, and abusive comments. Her close friends were often confused, unable to demarcate the Ulman of social media as a separate fiction, even when she would try to explain the project away from the keyboard. By repeating a lie for three months, she created a truth that she was unable to dismantle.

On September 14, 2014, Ulman posted a black-and-white photograph of a rose, the kind of banal image one might find in a frame purchased at a “tasteful” department store. The caption read, “THE END-EXCELLENCES AND PERFECTIONS.” It received 129 likes.

Excellences and Perfections was presented by First Look and archived by Rhizome in late 2014. 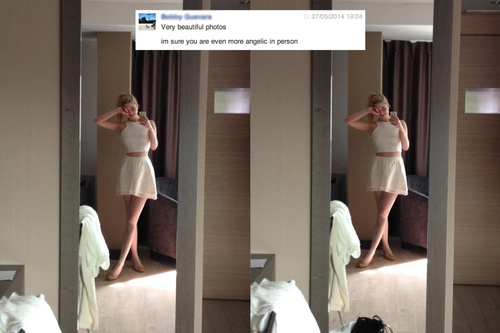