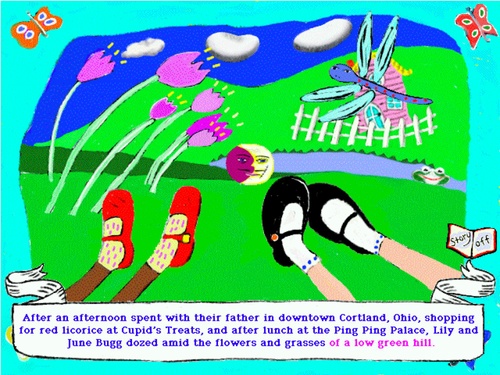 In the 1990s, Theresa Duncan defied industry norms by creating lyrical CD-ROM adventures based on young girls’ everyday experiences. As the CD-ROM market declined, the games gradually fell into obscurity. This online exhibition brings them back, allowing you to play them in a web browser. All three of Duncan’s works were markedly different from most of the “games for girls” of the time. Instead of dating or dress-up, they encouraged players to freely explore fantastical, richly textured worlds. Chop Suey (Magnet Interactive, 1995, co-created with Monica Gesue) is a delirious daydream, Smarty (Nicholson Associates, 1996), a small-town summer idyll, and Zero Zero (Nicholson New York, 1997), a romp through the bohemian Paris of 1900. All three of the games depict a child’s lived experience with richness and complexity, rather than mere niceness: many of the adult characters have bad habits or hygiene, and the soundtrack is full of city noises. Critic Jenn Frank wrote that Duncan’s work “dared to represent the criminally underrepresented: that is, the wild imagination of some girl aged 7 to 12.”

The games show a passionate investment in the possibilities of the CD-ROM as a format for interactive storytelling. For example, in Chop Suey, characters often appear in multiple scenes, allowing users to discover relationships among them, as when the gas station attendant reappears in the arms of a protagonist’s older sister. Smarty can be switched between daytime and nighttime as users play; each scene is rendered differently in the light and the dark. And in Zero Zero, numerous hidden stories and activities—from shadow-puppet plays to books that can be opened and read—are embedded within a larger story.

Each of Duncan’s CD-ROMs can be simultaneously seen as single, standalone works and as collections of nested works. They are full of songs, images, and readings that were brought to life through collaborations with uniquely talented artists, performers, musicians, and programmers. Monica Gesue cocreated Chop Suey, Ian Svenonious and Jeremy Blake contributed illustrations and more, Brendan Canty provided music, and creative types including David Sedaris participated as voice-over artists.

For this First Look online exhibition, Rhizome’s Digital Conservation Department in partnership with the University of Freiburg has made the full CD-ROMs available through the web browser–based “Emulation as Service” system. To play the games and explore further, click here.

This presentation was made possible, in part, by the 463 backers of Rhizome’s Kickstarter campaign to restore the Theresa Duncan CD-ROMs, with assistance from Leadership Level donor Mark Matienzo and generous support from Mailchimp. The games’ rerelease has been made possible thanks to the cooperation of many people, especially Tom Nicholson and Mary Duncan.