PaperRad: Welcome To My Homey Page

PaperRad: Welcome To My Homey Page 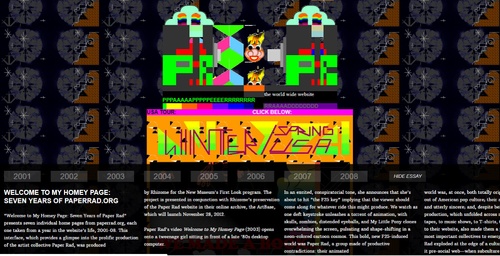 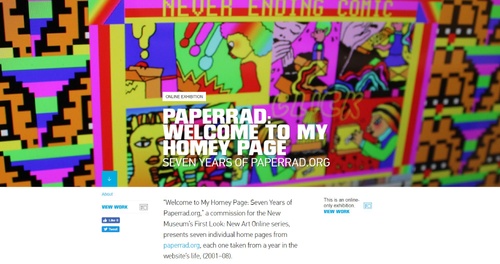 Exhibitions
PaperRad: Welcome To My Homey Page
In 2012, the New Museum commissioned “Welcome to My Homey Page: Seven Years of Paperrad.org” as part of its First Look online exhibition series. The exhibition presents seven individual home pages from paperrad.org, each one taken from a year in the website’s life, (2001–08).

One of the most important art collectives to emerge in the early ‘00s, Paper Rad exploded at the edge of a cultural time zone—before the social web—when subculture was still palpable and also clearly becoming impossible to sustain. They emerged within a community dedicated to DIY art practice that had strong roots in Providence, Rhode Island, as well as cities like Detroit, Baltimore, Boston, and towns in Western Massachusetts. Paper Rad became known for a cartoon cosmos that felt like a psychedelic, subversive response to American pop culture that was hatched out of a sincere and deep engagement to it. Their work began with ’zines and music, and eventually grew to encompass digital animation, videos, installations, and their website—paperrad.org—which became an increasingly central part of their work as it drew attention and followers.

“Welcome to My Homey Page” only alludes to the dynamism of the Paper Rad website. This project presents an evolution of yearly periods but the page was changed daily, continually layered with new content or reorganized spatially. The interface, which provides a glimpse into the prolific artistic production of this collective, was produced by New Museum affiliate Rhizome in conjunction with the preservation of the entire Paper Rad website in their online archive, the ArtBase.1

Thanks to Rhizome’s preservation efforts, the Paper Rad website is back online—free and available for the public to view. Link here: http://archive.rhizome.org:8080/welcome-to-my-homey-page/

In 2018, the site was archived by the New Museum Archives using Rhizome’s Webrecorder tool. The archived copy may be viewed via Webrecorder.io, here: https://webrecorder.io/NewMuseumArchive/first-look-welcome-to-my-homey-page/