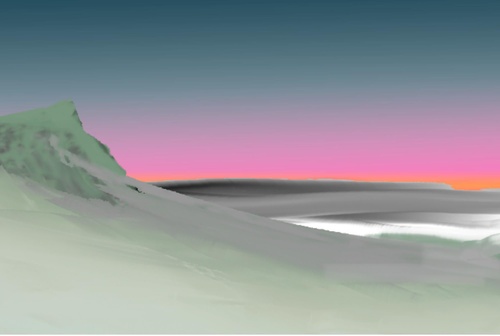 Exhibitions
Brushes
In 2015, the New Museum and Rhizome co-presented “Brushes,” an exhibition of eight artists – Laura Brothers, Jacob Ciocci, Petra Cortright, Joe Hamilton, Sara Ludy, Michael Manning, Giovanna Olmos, and Andrej Ujhazy – who paint with the computer as part of a serial publishing or blogging practice. The exhibition, presented as part of the online exhibition series First Look, launched new works each week over the course of six weeks, and included a performance by participating artist Giovanna Olmos, as well as a takeover of the Rhizome Instagram page. “Brushes” cast light on digital painting at a moment when the practice was gaining more widespread recognition.

As art historian Alex Bacon wrote in his essay for Rhizome, “In a sense, painting has always existed in relation to technology, when the term is understood in its broad definition as the practical application of specialized knowledge: the brush, the compass, the camera obscura, photography, or the inkjet printer.” However, if painting has long involved the application of tools and techniques, it has also served another function: it makes technological conditions available for visual contemplation in the gallery. (Think, for example, of Vera Molnar’s television paintings, which evoke the visual style of that technology.)

Paintings displayed in the gallery are increasingly also contemplated online on platforms such as Instagram, yet the role played by works created and experienced on the computer and the internet has often been overlooked in painting discourse. This kind of digital painting has existed since the 1960s: for example, the category of “computer paintings” was included in Jasia Reichardt’s landmark 1968 art and technology exhibition “Cybernetic Serendipity” at the Institute of Contemporary Arts in London, and the 1970s software SuperPaint already included many features found in modern paint applications. “Brushes” acknowledged this long history while focusing on practices that had emerged in recent years.

In particular, this exhibition highlighted artworks that refer back to a bodily gesture made by the artist: mouse movements, digitized brushstrokes, or touchscreen swipes. The artists presented in “Brushes” took diverse positions on questions of process and output, and explored the potential of “prosumer”1 tools, acknowledging their limitations while also harnessing their affective and formal potential. Reflecting the shifting role of painting in the gallery, “Brushes” suggested that works produced on the computer and experienced via the browser and the mobile app have an equal place in the medium’s discourses, offering a space for contemplation of our technological society from within its complex apparatus.