Exhibitions
MEDI(t)Ations: Adrian Piper’s Videos, Installations, Performances, and Soundworks 1968-1992
“Adrian Piper: A Retrospective and MEDI(t)Ations” presents two exhibitions of Piper’s work at the same time: “Adrian Piper: A Retrospective, 1965-2000,” curated by Maurice Berger for the Fine Arts Gallery, University of Maryland and “MEDI(t)Ations: Adrian Piper’s Videos, Installations, Performances, and Soundworks 1968-1992,” curated by Dara Meyers-Kingsley. The retrospective brings together Piper’s well-known works from the 1980s and 90s that interrogate the viewer’s attitude toward race and gender with work from the 1960s and 70s oriented around questions of identity as well as art-making and viewing practices. The exhibition emphasizes the variety of Piper’s mediums: painting, drawing, manipulated photography, photo-text pieces, audio and video works in Minimalist installations, as well as masquerade, lectures, and performance pieces.

“In part my work stems from a compulsion to embody, transform, and use my experiences as a woman of color in constructive ways, in order not to feel trapped and powerless. It is an act of communication that politically catalyzes its viewers into reflecting on their own deep impulses and responses to racism and xenophobia, relative to a target or stance that I depict. Through the work I try to construct a concrete, immediate and personal relationship between me and the viewer that locates us within the network of political cause and effect. For this reason many people assume that my work is ‘autobiographical; this is erroneous. That I write autobiographically about some of my work and use my person in some of my work does not mean that I am the subject of my work.”1

“My early soundworks of the late 1960s reveal my aesthetic and formal involvement with ‘pure’ Minimalism , Conceptual art, and aleatoric, meditative, task-oriented, or permutational decision procedures used by such artists as Sol Lewitt and time-based artists such as John Cage, La Monte Young, and early Steve Reich. These works are concerned with duration, repetition, and meditative consciousness of the indexical present. …They are the kind of work many art critics can’t comprehend being made by a black woman (most people in the art world did not realize I was black or a woman at the time).

These allegiances inform and illuminate the formal strategies of my later, more overtly interactive and political performances, installations, and videos of the 1970s and 1980s (which most people miss because they get so upset by the content of these later works). Soundworks of the 1970s include installation and performance soundtracks and rehearsals that involve the listener in the ongoing, immediate present of my subjective consciousness, one-on-one personal interactions, and, later, satirical monologues or dialogues that express stereotypical responses to various political situations and may or may not capture the listener’s own thoughts about those situations.

….Sound and video works of the 1980s and 1990s focus explicitly and squarely on racism, racial stereotyping, and xenophobia. The formal strategies and concerns remain a constant, but these are now put in the service of direct and immediate confrontation between the work and the viewer, almost always using the devices of direct speech, naming, the confrontational gaze, and interpersonal I/you form of address.”2 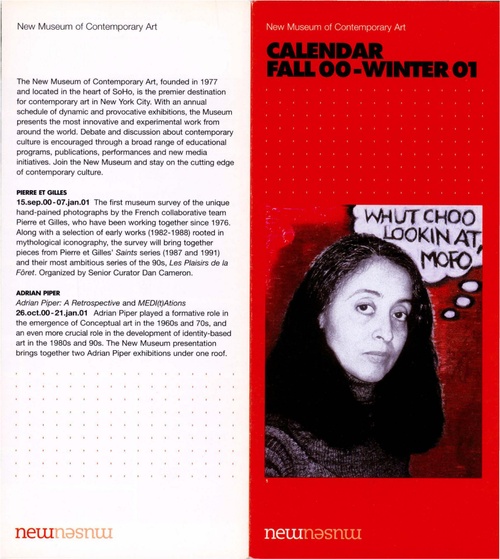