In Part One of “Stand Up,” acclaimed poet Cathy Park Hong will consider how humor can be an energetic mode of critique in relation to race and sexuality. Led by a series of questions—How can laughter be both a form of subversion and of mourning? How does comedic performance meddle with language?—this talk also considers new interactive models generated from contemporary poetry and performance. Her lecture informs Hong’s developing body of work about the abject body and comedy. In Part Two, celebrated poets Ariana Reines, Catherine Wagner, and Ronaldo Wilson will perform and read works in response to Hong’s propositions. Artist Mores McWreath will present a video work.
“Stand Up” is held in conjunction with the digital project that Hong and McWreath will premiere in March as part of First Look.

“Stand Up” is held in conjunction with the digital project that Hong and McWreath will premiere in March as part of First Look.

Cathy Park Hong’s first book, Translating Mo’um, was published in 2002 by Hanging Loose Press. Her second collection, Dance Dance Revolution, was chosen for the Barnard Women Poets Prize and was published in 2007 by W.W. Norton and her third book of poems, Engine Empire, was published in May 2012 by W.W. Norton. Hong is also the recipient of a Fulbright Fellowship, a National Endowment for the Arts Fellowship, and a New York Foundation for the Arts Fellowship. Her poems have been published in A Public Space, Poetry, Paris Review, Conjunctions, McSweeney’s, Harvard Review, Boston Review, the Nation, and other journals. She is a member of the artist/writer’s collaborative 2-UP and is an Associate Professor at Sarah Lawrence College.
Mores McWreath has had solo exhibitions in New York and Los Angeles and has been included in group exhibitions, performances, screenings, and festivals both nationally and internationally. He studied at the Cooper Union, New York, the University of Southern California, Los Angeles, and the Whitney Independent Study Program, New York.
Ariana Reines is the author of The Cow (2006), Coeur de Lion (2008), Mercury (2011), and the play TELEPHONE (2009).
Catherine Wagner’s books include Nervous Device (City Lights, 2012) as well as Fence: My New Job (2009), Macular Hole (2004), and Miss America (2001). She is currently writing a column on poetry for the Los Angeles Review of Books. Her work has been anthologized in the Norton Anthology of Postmodern American Poetry (forthcoming), Out of Everywhere: Linguistically Innovative Poetry by Women in North America and the UK(forthcoming), Gurlesque, Poets on Teaching, Best American Erotic Poems, and elsewhere. She is professor of English at Miami University and lives in Oxford, Ohio, with her son.
Ronaldo V. Wilson is the author of Narrative of the Life of the Brown Boy and the White Man (University of Pittsburgh, 2008; winner of the 2007 Cave Canem Poetry Prize) and Poems of the Black Object (Futurepoem Books, 2009; winner of the Thom Gunn Award and the Asian American Literary Award in Poetry in 2010). His latest book, Farther Traveler: Poetry, Prose, Other, is forthcoming from Counterpath Press in 2013. Recent work appears or is forthcoming in the journals Callaloo, Interim, Bombay Gin, Spoon River Poetry Review, 1913, and the Volta, as well as in the anthologies Angles of Ascent: A Norton Anthology of Contemporary African American Poetry (Norton, 2013), The Sonnets: Translating and Rewriting Shakespeare (Nightboat Books, 2012), and Among Friends: Engendering the Social Site of Poetry (University of Iowa Press, 2013). Cofounder of the Black Took Collective, Wilson is a Visiting Assistant Professor of Poetry, Fiction, and Literature in the Literature Department of the University of California, Santa Cruz.

Propositions is a public forum that explores ideas in development. Each two-part seminar introduces a topic of current investigation in an invited speaker’s own artistic or intellectual practice. Over the course of a seminar session, these developing ideas are responded to, researched, and discussed to propel them forward in unique ways.

A Proposition by Center for Historical Reenactments: After-after Tears

A Proposition by Montserrat Albores Gleason 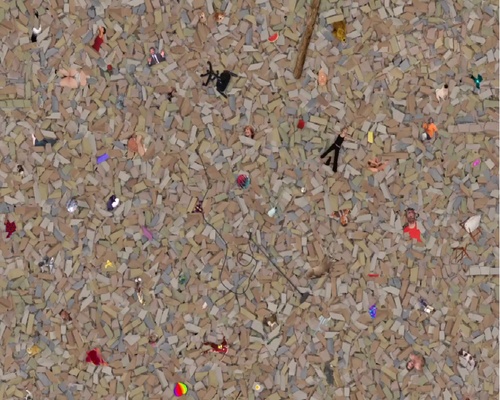 A Proposition by Ajay Kurian: The Persistence of Gardens—Nuclear, Digital, and Otherwise

A Proposition by Mac Wellman: The Dramaturgy of Asteroids

A Proposition by Pati Hertling: ​Paris was a Woman. The Future is a Cloud

A Proposition by Malik Gaines: “The Race Speech”

A Proposition by Fionn Meade: When Genealogy Becomes Critique

A Proposition by LaToya Ruby Frazier: ​​FRAMEWORK: Activism, Memory, and the Social Landscape

A Proposition by Dave McKenzie: “Dear Siri, It’s not you—it’s me. Xo, D”

A Proposition by House of Natural Fiber: Intelligent Bacteria

A Proposition by Slavs and Tatars: Reverse Joy

A Proposition by Anthony Huberman: The Letter 'T'

A Proposition by Paul Chan: Wht is lawlessness? Wht is a book?

A Proposition by Byron Kim: A Cosmology of Doubt

A Proposition by Doug Ashford: We sometimes say dreams when we want to say…

A Proposition by Gabi Ngcobo: The Panafricannial: Towards a Roaming African Biennial

A Proposition by Danh Vo: Some rape scenes in cinema and the restoration of the Statue of Liberty

A Proposition by Chus Martinez: aren't we living in a world where headless men only desire decapitated women?

A Proposition by Young Jean Lee: A Collaboration with the Audience

A Proposition by Sharon Hayes: BEYOND THE MOON IS LESBOS and other tales of queer time

A Proposition by Miwon Kwon: Ends of the Earth (and Back)

A Proposition by Ute Meta Bauer: Light Years and Multiverses

A Proposition by Hans Ulrich Obrist: Maps for the 21st Century

A Proposition by Haegue Yang: Towards Duras

A Proposition by Nikhil Chopra: Yog Raj Chitrakar and the Traveling Troupe

A Proposition by Kara Walker: The object of Painting is the subjugated Body