“What Happened to the Institutional Critique?”: James Meyer and Renée Green in Conversation 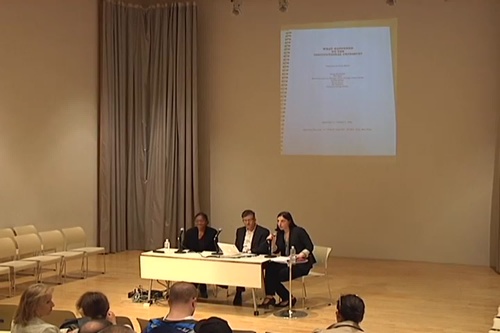 “What Happened to the Institutional Critique?”: James Meyer and Renée Green in Conversation

In the fall of 1993, the art historian James Meyer curated a group show entitled “What Happened to the Institutional Critique?” at American Fine Arts gallery in SoHo. Responding to “the generalization of the political” at the 1993 Whitney Biennial, Meyer gathered together an emerging generation of artists engaged in critical practices around institutions, including, but not limited to, museums. In the wake of postmodernism and on the cusp of globalization, Meyer’s exhibition, like the artists whose work he selected, interrogated the status of institutions as well as critique in the 1990s.

One of the key figures in Meyer’s show was Renée Green, whose work had also been included in the 1993 Whitney Biennial. At American Fine Arts, Green presented materials related to her project “Secret,” first realized earlier that year in Firminy, France. Since the early 1990s, Green has worked with film and video, digital media, architecture, and text to investigate circuits of relation and exchange over time, and she focuses on the effects of a changing transcultural sphere on what can now be made and thought. This conversation between Meyer and Green will return to their interrelated projects from 1993 to reflect on and assess what has happened to these critical practices over the past twenty years.

Organized in collaboration with ICI as part of a series of conversations on landmark exhibitions in 1993.