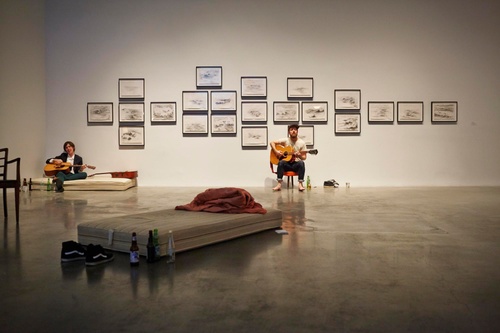 Join artist Ragnar Kjartansson and his parents, Guðrún Ásmundsdóttir and Kjartan Ragnarsson, for the US premiere of the newly remastered film Morðsaga (1977), the first feature film produced in Iceland in which both Kjartansson’s parents performed.

This event is being held in conjunction with “Me, My Mother, My Father, and I,” the artist’s first New York solo museum exhibition. The central piece of the exhibition, Take Me Here by the Dishwasher: Memorial for Marriage (2011/2014), takes inspiration from a scene in Morðsaga in which the main character of the film, played by Kjartansson’s mother, fantasizes about a plumber, played by Kjartansson’s father, in a sex scene on the kitchen floor. As family legend has it, Kjartansson was conceived the night after the film shoot.

Born into a family of actors and theater professionals, Kjartansson draws from a varied history of stage traditions, film, music, and literature. His performances, drawings, paintings, and video installations explore the boundary between reality and fiction as well as constructs of myth and identity. He often attempts to convey genuine emotion through melodramatic gestures and conversely reveals sincerity within pretending. Playing with stereotypes usually projected onto the persona of the actor, Kjartansson both celebrates and derides the romanticized figure of the artist as cultural hero. His performances are often feats of endurance, which last for hours or days at a time, taking a motif as simple as a pop song and transforming it through protracted repetition into a transcendent mantra. At the New Museum, Kjartansson will present works with and about his family, providing an opportunity to look at the ways his work explores family ties and delusions of grandeur, as well as to engage with his ongoing interest in the conflation of reality and fantasy. 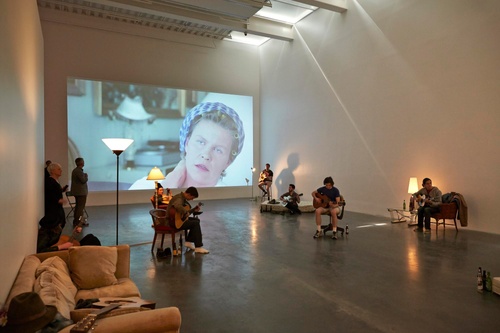 Ragnar Kjartansson: Me, My Mother, My Father, and I