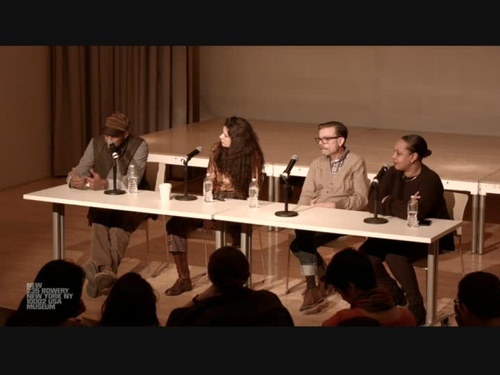 In February 2019, the New Museum presented a special screening of never-before-seen archival footage of ’”3 Legged Race”: Harlem, Art, and Community’ on the occasion of the New Museum exhibition “Nari Ward: We the People.” Shot by artist Marcel Odenbach, the footage documents the creation of the 1996 exhibition “3 Legged Race,” which featured the work of Odenbach, Nari Ward, and Janine Antoni. The three artists organized this site-specific show in an abandoned firehouse on 141st Street in Harlem in an effort to make contemporary art accessible and open to the local community. A New York Times review from that time called the project “an example of the way art ought to go and is increasingly going: out of galleries and museums and into the world.”

Following the screening, Ward, Antoni, and Odenbach discussed their experiences working outside traditional institutional spaces and considered how Harlem’s community and radical history have informed artistic practice through its numerous cultural, racial, and economic transformations. The artists were joined by Lauren Kelley, Director and Chief Curator of the Sugar Hill Children’s Museum of Art and Storytelling, who guided the conversation from the perspective of arts and community building efforts in Harlem.

Nari Ward: We the People