Cross Talk: A Multicultural Feminist Symposium addressed the entangled questions of race, gender and sexuality, and brought together a wide range of activists, artists, and cultural critics who energetically fought against racism and sexism in cultural institutions, educational programs, medical practices, and the legal system. Rather than recreate a set of neat oppositions–black versus white, Latino versus Anglo – Cross Talk charted the overlapping and contradictory worlds inhabited by diverse communities.1

The opening panel - Negotiating Looks - asked, “How have women of color in the U.S. negotiated the everyday experience of being imagined as docile exotics, wild beasts, or being confronted with ‘lt’s funny, you don’t Iook (fill in the blank)?’ How have multicultural feminists, on the one hand, criticized the internalized exile of ‘white wannabes’ (who transform themselves through cosmetic surgery or dying their hair) while, on the other hand, offering less ‘politically correct’ approaches to questions of appearance?  How have feminists painfully and playfully reinvented the relationships between ‘looks’, identity, and culture?”2 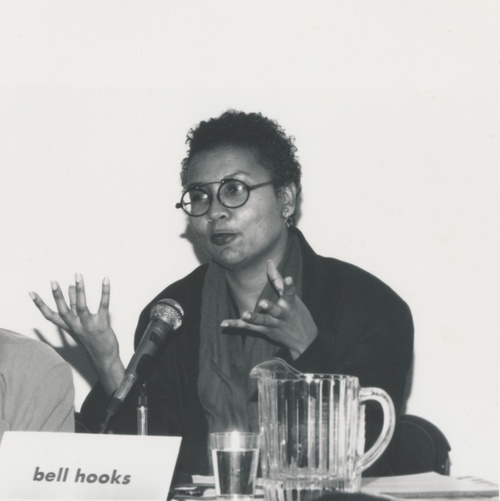 Cross Talk: A Multicultural Feminist Symposium: In the Face of Violence