My name is Helga Christoffersen and I’m an assistant curator here at the new museum.

What you are standing in is the exhibition Ru by Petrit Halilaj, a young artist born in Kosovo. And for this exhibition Petrit, he did a two part project that you see here: a video work and large fabric sculpture and then a large kind of immersive installation. For all these works the starting point was really his hometown, the town that he grew up in in rural Kosovo called Runik. Runik is the oldest archeological site in Kosovo and it’s were a number of very important and Neolithical objects were found in two diggings in 68 and 83.

They are not today and have also not been historically accessible in museums anywhere or really accessible to the public. And so the situation has created for the residents in Runik somewhat of a gap or what Halilaj considers this space for imagination. Halilaj has spent the last 4 years visiting Runik often and talking to the residents about these finds and also about the fact that still today the resident finds, they find many objects in the ground. The stories you hear in the videos are friends and neighbors describing objects that they have found.

Halilaj has spent a long time understanding the extent of the dig in Runik and has through multiple records, archeological records that he came about, both through legal and also somewhat kind of secret ways, have found out that, as far as he can tell, 505 objects were found in Runik that are currently in storage in different museums in different countries. And so Halilaj really ventured out to really recreate this collection of the 505 objects and make it accessible to the public for the first time. It has never been shown or seen in Kosovo either.

He creates these objects through this metaphor of migratory birds and so this installation you see really imagines what it would mean for these objects first of all to come together but also to live as objects that thrive through movement rather than through being placed permanently in any one place. What is characteristic for migratory birds is of course that they don’t have any one home or belong to any one nation but that they in fact thrive only through moving across nations and across borders.

So the whole installation that you see here at the New Museum, also created for the New Museum, is a poetic metaphor perhaps for what it would mean for us to consider historical objects not fixed entities that should remain still and preserved for eternity in one single place but really what would it mean that we consider historical objects through movement and their significance and their reinvention and kind of reinterpretation could arrive constantly through the fact that they could move and be brought to bear on not only one narrative or one nation but several. 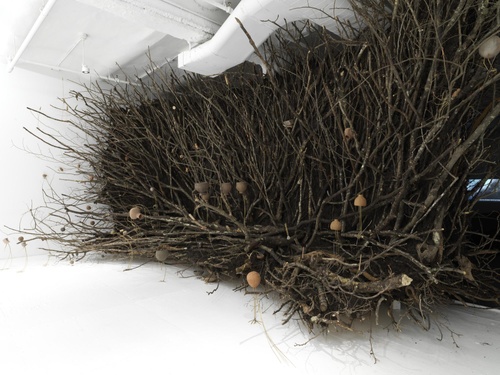