I’m Alexandra Pirici and I’m an artist with a background in choreography and dance and working also a lot in the visual arts. The new work Co-natural that is now on view at the New Museum is an ongoing action with live performers and a holographic image. And I think it tries to explore the concept of presence and self and idea of a body and where it starts and where it ends and whether its something unitary as let’s say as posited by the western concept of the individual or whether it’s something that is fragmented and distributed across many bodies and many species and many histories and times and other spaces. So I think it’s a work about fragmentation and dispersion but also about relation and entanglements.

I was also interested in working with this disembodied presence, which is the holographic image, not in opposition to the live bodies of the performers but as a compliment to it, as an addition and as something that can be in alliance with the live body in the exhibition space. Because I think it also complicates what performative works can do in the exhibition space and the very notion of a body and of liveliness also and of life in general. As a structure, the work gradually accumulates in space in terms of presence so it starts with the image alone, with this holographic presence alone and one performer adds for an hour and three performers add for another hour, five performers, then again five performers, three performers, one performer and the image alone sometimes. So I think it made sense, the structure made sense in relation to the concept as this gradual build up and accumulation and this this gradual deconstruction.

So it’s like unfolding and then folding back. Some of the material repeats into the next hour and in that sense it’s a bit like an evolutionary process where some information stays, some is taken out or is left behind, some of it mutates or is re-contextualized by the new bodies that come into space.

Audio guide recorded on the occasion of “Alexandra Pirici: Co-natural.” 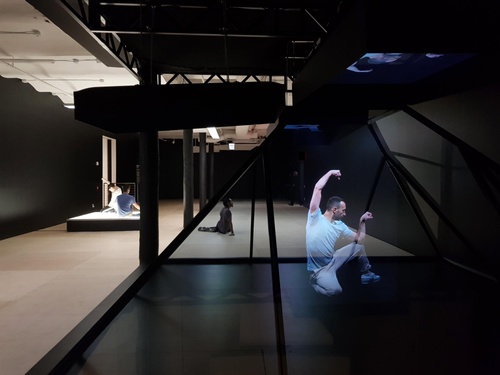