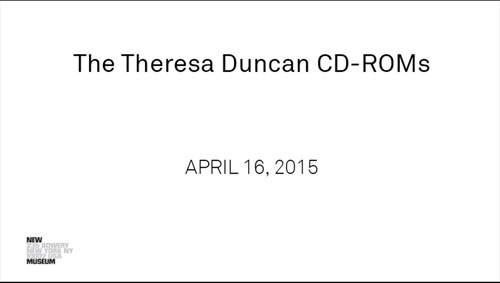 This event marks the launch of a new online restoration of three pioneering feminist video games.

In the mid-1990s, Theresa Duncan created Chop Suey (1995), Smarty (1996), and Zero Zero (1997), three lyrical adventure video games for young girls. At a time when video game culture sorely lacked a diversity of digital experience, these were visionary CD-ROMs that, in the words of games critic Jenn Frank, dared “to represent the criminally underrepresented: that is, the wild imagination of some girl aged 7 to 12.”

Duncan’s CD-ROMs have become largely inaccessible. Recognizing their significance, Rhizome undertook a crowd-funded preservation effort to make all three playable for free for anyone with a modern web browser.

The Theresa Duncan CD-ROMs will be playable online at Rhizome and as part of the First Look online exhibition series, copresented by Rhizome and the New Museum.
This event was made possible, in part, by the 463 backers of Rhizome’s Kickstarter campaign to restore the Theresa Duncan CD-ROMs with assistance from Leadership Level donor Mark Matienzo and generous support from Mailchimp. The games’ rerelease has been made possible thanks to the cooperation of many people, especially Tom Nicholson and Mary Duncan. For full credits, please see our Kickstarter page.