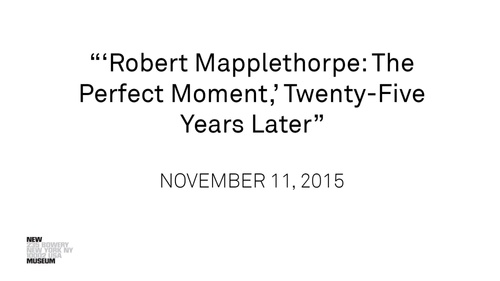 Organized by the Cincinnati-based nonprofit FotoFocus, the panel discussion “‘Robert Mapplethorpe: The Perfect Moment,’ Twenty-Five Years Later” will commemorate the twenty-fifth anniversary of the obscenity trial sparked by the artist’s controversial exhibition “The Perfect Moment” at the Contemporary Arts Center Cincinnati. Under the leadership of Mary Ellen Goeke, Executive Director of FotoFocus, and curated by Kevin Moore, Artistic Director and Curator of FotoFocus, the program will convene leading curators and a legal expert to discuss the significance and implications of this presentation over the past twenty-five years and the various curatorial approaches to engaging with Mapplethorpe’s work and legacy. The event follows the “Mapplethorpe +25” symposium, which was organized by FotoFocus and the Contemporary Arts Center Cincinnati and was held on October 23–24, 2015.

The Cincinnati presentation of “Robert Mapplethorpe: The Perfect Moment” opened on April 7, 1990 at the Contemporary Arts Center Cincinnati in a climate of national cultural unrest. The exhibition immediately sparked controversy when politicians took offense to the show and the use of public funds provided by the National Endowment of the Arts to support it, leading to the indictment of the Contemporary Arts Center Cincinnati and Director Dennis Barrie on obscenity charges. Similar controversy had resulted in the cancellation of the exhibition tour at the Corcoran Gallery of Art in Washington, DC, the previous year. The historic trial that followed—where, for the first time, a museum and its director faced criminal charges because of an art exhibition—brought national attention to the subject of public funding for the arts, as well as arts censorship.

Twenty-five years later, numerous reassessments of the artist’s career have prompted fresh insights. This panel discussion will revolve around this revitalized interest in Mapplethorpe, as curators, artists, critics, and others explore the broader question: What does Mapplethorpe’s work tell us about the culture we have inherited and inhabit today?

Robert Mapplethorpe was born in 1946 in Floral Park, Queens. He studied drawing, painting, and sculpture at Pratt Institute in Brooklyn. Influenced by artists such as Joseph Cornell and Marcel Duchamp, he also experimented with various materials in mixed-medium collages, including images cut out from books and magazines. He eventually began producing his own photographs with a Polaroid camera and in 1973 received his first solo gallery exhibition titled “Polaroids” at the Light Gallery in New York. Two years later Mapplethorpe acquired a Hasselblad medium-format camera and began shooting photographs of his friends and acquaintances—some of whom were involved in the New York S&M scene, which by the late 1970s, he grew increasingly interested in documenting. In 1986, he was diagnosed with AIDS. Despite his declining health, he continued to make strides in his career, including his first major American museum retrospective at the Whitney Museum of American Art in 1988. Mapplethorpe passed away in 1989, but his legacy lives on through his work, which is represented by galleries and is in the collections of major museums around the world.

About the Panelists
Amy Adler is Emily Kempin Professor of Law at New York University School of Law, where she was awarded the Podell Distinguished Teaching Award in 2015. A leading expert on the intersection of art and law, Adler has lectured about the First Amendment’s treatment of visual images to a variety of audiences, including the attorneys general, museum curators, and the FBI. Adler graduated from the Yale Law School, where she was a senior editor of the Yale Law Journal, and she graduated summa cum laude from Yale University, where she was elected to Phi Beta Kappa and received the Marshall-Allison Prize in the arts and letters. Adler clerked for Judge John M. Walker, Jr., of the US Court of Appeals for the Second Circuit and worked as an associate at Debevoise & Plimpton LLP before joining the NYU Law faculty.

Jennifer Blessing is Senior Curator of Photography at the Solomon R. Guggenheim Museum in New York. Currently, she is organizing “Photo-Poetics: An Anthology” at the Solomon R. Guggenheim Museum, on view from November 2015 through March 2016. Her recent exhibitions include the Guggenheim presentation of “Carrie Mae Weems: Three Decades of Photography and Video,” an exhibition originated by the Frist Center for the Visual Arts in Nashville; “Rineke Dijkstra: A Retrospective,” in collaboration with the San Francisco Museum of Modern Art (SFMOMA); and the Guggenheim’s presentation of SFMOMA’s exhibition “Francesca Woodman,” among others. She publishes and lectures widely on art and cultural practices involving photographic representation. Blessing received a BA from Brown University and an MA in Art History from the Institute of Fine Arts, New York University.

Paul Martineau is Associate Curator in the Department of Photographs at the J. Paul Getty Museum. He received a BA in art from the University of Massachusetts at Boston and an MA in Art History from Williams College. Before joining the J. Paul Getty Museum in 2003, Martineau held positions at the Museum of Fine Arts in Boston and the Sterling and Francine Clark Art Institute. He has organized numerous exhibitions at the Getty, covering a range of topics that span from the mid-nineteenth century to the twenty-first century. Martineau is the author of several books, including Minor White: Manifestations of the Spirit (2014); Eliot Porter: In the Realm of Nature (2012); Herb Ritts: L.A. Style (2012); and Paul Outerbridge: Command Performance (2009).

Kevin Moore is an independent advisor, curator, and writer based in New York. He earned a PhD in Art History in 2002 from Princeton University and has worked in curatorial departments at the Metropolitan Museum of Art and the Fogg Art Museum, Harvard University. His museum exhibitions include “Starburst: Color Photography in America 1970–1980,” the Cincinnati Art Museum (2010); “Real to Real: Photographs from the Traina Collection,” the de Young Museum, San Francisco (2012); and “The One-Eyed Thief: Taiyo Onorato and Nico Krebs,” the Contemporary Arts Center, Cincinnati (2014). Since 2013, Moore has been Artistic Director and Curator of FotoFocus, Cincinnati.

Britt Salvesen is Curator and Head of the Wallis Annenberg Photography Department and the Prints and Drawings Department at the Los Angeles County Museum of Art. Recently, she has curated the exhibitions “Haunted Screens: German Cinema in the 1920s” (2014); “See the Light—Photography, Perception, Cognition: The Marjorie and Leonard Vernon Collection” (2013); “Under the Mexican Sky: Gabriel Figueroa—Art and Film” (2013), and “Robert Mapplethorpe: XYZ” (2012).