Are You Angry Yet? was a free panel discussion presented by the New Museum and held at The Public Theater. The event was conceived as a forum for discussing recent legislative actions regarding the National Endowment for the Arts (NEA) in the wake of controversies resulting from NEA funding of exhibitions that included the religiously imbued photographs of Andreas Serrano and sexually explicit photographs of Robert Mapplethorpe, as well as larger issues of patronage and censorship. The program began with a slide and video presentation by Art Positive on censorship and art, followed by presentations by each panelist, and closing with an open discussion with the audience wherein attendees were encouraged to write letters to Congress in support of federal funding for the arts.

The panel was composed of arts administrators, activists, adn artists, and moderated by New Museum Librarian and Special Publications Coordinator Russell Ferguson. Participants included Ted Potter, Director of the Southeastern Center for Contemporary Art, which recieved NEA funds to organize the exhibition that included Serrano’s photographs; and Carol Becker, Chair of the Department of Vidual Arts at the School of the Art Institutue of Chicago, which had been involved in two recent controversies - one over the display of an American flag in a work by a student, and the other over a student’s portrait of the late mayor of Chicago, Harold Washington. Also on the panel were Jack Duncan, partner in a Washington-based law firm and lobbyist working on Capitol Hill for the American ARts Alliance; Faith Ringgold, an artist who, in 1970, organized the “People’s Flag Show,” an exhibition that resulted in her conviction for desecration of the American flag; and Art Positive, an activist artists group affiliated with the organization ACT UP. 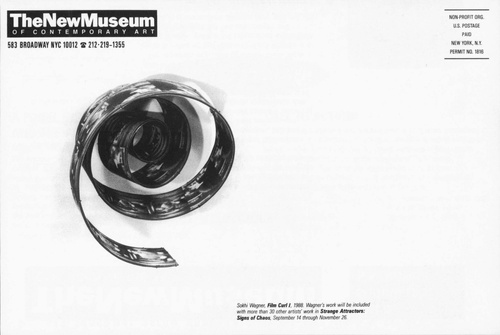 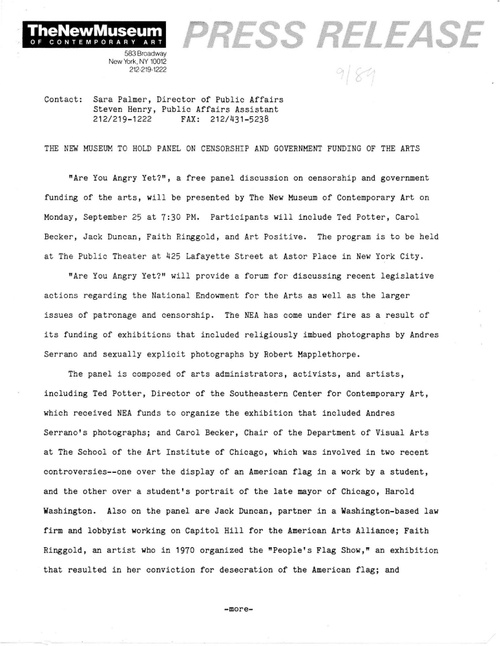