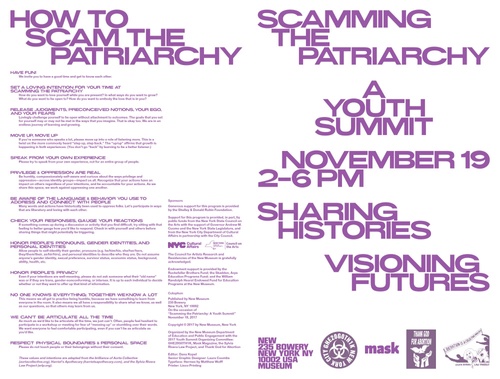 As part of the Department of Education and Public Engagement’s ongoing programs engaging arts and social justice, the New Museum hosted its second annual youth summit and celebration. The summit was organized by a luminary group of artists, writers, and activists committed to community building, including GHE20G0TH1K,  Mask Magazine, the Sylvia Rivera Law Project, and Thank God For Abortion.

This iteration of the program built upon the principles of healing, self-love, skill building, political education, and empowerment established by the inaugural youth summit committee (BUFU, Brujas, Discwoman, and members of House of Ladosha). Emphasizing resilient visions for sustainability and thriving, and honoring the knowledge and resources of an intergenerational group of voices, the summit provided a space for dialogue rooted in oral histories and lived experience. Workshops focused on tangible skills and sustenance for creative, economic, and spiritual growth.

GHE20G0TH1K
GHE20G0TH1K, launched in 2009 as a local club night by DJ and Manhattan native Venus X, has since become a globally recognized institution hellbent on crushing fashion and music stereo-types. From the people that crowd its dance floor to the global spectrum of music that penetrates  through its speakers to the irregular spelling of its name, nothing about GHE20G0TH1K (pronounced “Ghetto Gothic”) is conformist. The party began as a space to funnel aggression  through dark sonics and visceral dancing, in addition to altering the notion of goth as an exclu-sively Caucasian subculture. The manifestation of a physical space to communicate Venus and company’s culled influences would prove key in establishing GHE20G0TH1K as a full-fledged brand, one synonymous with New York’s thriving underground scene. Music has been and continues to be the party’s biggest pull, but the experiential components derived from its bombastic energy have inspired creative feats in other disciplines as well. Now in its eighth year, GHE20G0TH1K’s legacy continues, with a record label, a retail space, and regular show-cases all over the world. The movement continues to pride itself on an independent mindset and business model but, like any revolution, the vision’s progression is completely dependent on communal input. @GHE20G0TH1K

MASK MAGAZINE
Mask is a culture magazine in the age of unrest. A subscriber-supported, ad-free online  publication and podcast network, Mask focuses on underground style and culture. Mask strives to be a platform for empowering struggle and solidarity across different places, scenes, and sentiments, by broadcasting the experiences of fellow antagonists and the everyday struggles of being young and discontent today. maskmagazine.com

SYLVIA RIVERA LAW PROJECT
The Sylvia Rivera Law Project (SRLP) works to guarantee that all people are free to self- determine their gender identity and expression, regardless of income or race, and without facing harassment, discrimination, or violence. SRLP is a collective organization founded on the understanding that gender self-determination is inextricably intertwined with racial, social, and economic justice. Therefore, SRLP seeks to increase the political voice and visibility of low- income people and people of color who are transgender, intersex, or gender-nonconforming. SRLP works to improve access to respectful and affirming social, health, and legal services for our communities, and believes that in order to create meaningful political participation and leadership, we must have access to basic means of survival and safety from violence. srlp.org

THANK GOD FOR ABORTION
Thank God For Abortion is a project birthed by Viva Ruiz and friends. Their mission is to elimi-nate the criminalizing stigma around abortion one T-shirt, performance, or fanzine at a time. Thank God For Abortion occupies a light and apology-free space in a conversation that, even among the left, is fraught with guilt and secrecy. They are committed to repossessing narratives and pulling away from the dominant, extreme right-wing “sin” perspective that continues to justify legislating the torture and death of abortion-seeking people. Thank God For Abortion broadens the spectrum of this conversation by inhabiting a joyful and authentic place in regards to people’s own experiences with abortion, and hopes to inspire others to do the same. They recognize that access to abortion, reproductive care, and sexual health services are basic human rights. thankgodforabortion.com 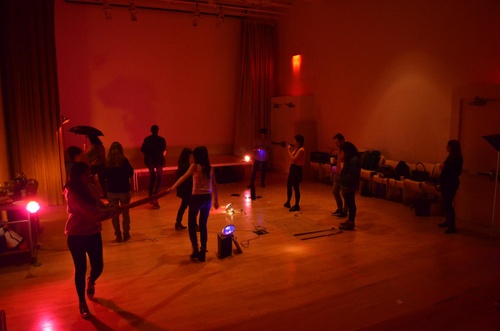