Cruzvillegas’s practice is closely linked to the Duchampian transformation of everyday objects into art. Early on, Cruzvillegas appropriated folk art made by his father, whose dedication to traditional craft lent a critical layer to the idea of the readymade. While his father made the objects out of economic need, the artist’s repositioning of this work as contemporary art zeroed in on the often-unaddressed issues of labor and credit that is embedded in appropriationist strategies. Cruzvillegas has also used ephemeral materials such as cake or maguey leaves to produce artworks that change over the course of the exhibition, highlighting the fragility of an object’s structural and seductive qualities.

Sibony’s works use construction materials, including industrial floor coverings, hollowcore doors, garbage bags, plywood, and vinyl to produce sculptures and installations whose delicate elegance belies their do-it-yourself roots. At times, the artist’s artwork operates against the traditional parameters of sculptural objects. Often dealing with the notion of absence, Sibony’s works are open-ended in their interpretation, seemingly proving that less material generates more meaning. His titles are integral to the works, describing the nuances of material and spatial relationships in much the same way as Barry Le Va titled his early scatter installations.

Smith’s work employs twine, ribbon, and the like to compress the lives of the objects she ties together—clothing, textiles, shoes, stuffed toys, and other cast-off materials that litter the urban landscape. Her sensibility is influenced by Abstract Expressionism, graffiti, and Japanese calligraphy. From Bale Variants to Bundles that range in scale from human-sized towers to more petite and portable assemblages, Smith’s works refer specifically to the inequities of a global economy in which thrown-away clothing from the First World is shipped in bales to the Third. Her larger Bale Variants memorialize what is lost along the way. Smith’s more recent projects have shifted towards immersive installations that reflect on the economies of excess and need. 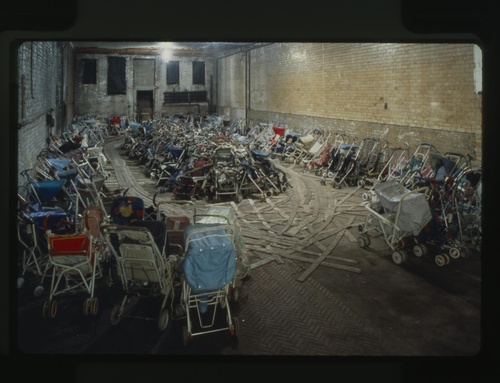