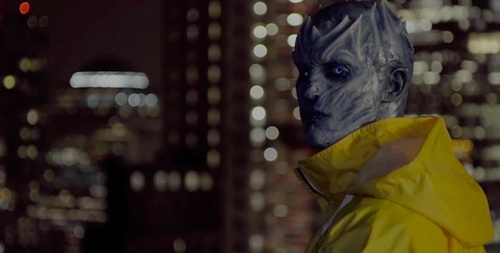 Exhibitions
DIS: A Good Crisis
Co-presented by Rhizome and the New Museum, “DIS: A Good Crisis” is an online exhibition of artist-made PSAs that consider the legacy of the 2008 financial crisis and the possibilities of universal basic income. Its title recalls the aftermath of the Second World War, when Winston Churchill (perhaps apocryphally) remarked, “Never let a good crisis go to waste.” A Good Crisis considers this provocation in relation to more recent crises, asking: What possibilities for social or economic change did the 2008 financial crisis create, and in what ways were these changes realized? Was it a “good crisis,” and if so, good for whom? Additionally, what new possibilities for political and social change, such as the increasingly popular idea of a guaranteed income for all, have emerged in the present moment of unprecedented inequality? Is there hope that this current crisis might not also “go to waste”?

The members of DIS—Lauren Boyle, Solomon Chase, Marco Roso, and David Toro— produced three new video works exploring these questions, scripted in collaboration with economist Moritz Schularick and writer and editor Drew Zeiba. With glossy production quality and a wryly nihilistic tone, the works circulated as paid advertisements on online media platforms such as YouTube, thus using the same channels as propagandistic messages from both the political establishment and fringe alike.1

The PSAs, which ran in the months leading up to the 2018 midterm elections, posit that: “After the global housing collapse there was the rare opportunity to revolutionize or at the very least regulate the economic world order that had just wiped out 50 years of middle class wealth gains. But now that Wall Street has taken away the one form of wealth middle class Americans had, their homes, they want to become your landlord. No more safety net, there is now a network of temporary homes, forcing renters into a state of perpetual social insecurity.” There are no heroes on Wall Street, DIS asserts, and the Night King – the piece’s protagonist – isn’t here to save us. Rather, he just wants to let us know where we went wrong: that we wasted a good crisis.2