In March 2020, the New Museum presented an afternoon of talks by artists, community organizers, and scholars on the occasion of an Art+Feminism Wikipedia Edit-a-thon. By expanding articles for feminist figures across the gender spectrum, Art+Feminism’s Wikipedia Edit-a-thons seek to address the structural underrepresentation of women, non-binary people, people of color, and Indigenous people on Wikipedia, the internet’s largest and most globally used free encyclopedia, the editors of which are predominantly cis and male. Art+Feminism provides tools and training for new Wikipedia editors, and organizes gatherings that support this work and enrich the ideas that drive it.

Interdisciplinary publishing collective Press Press explored the paradoxical nature of online cultural production for women of color, according to which visibility can pose risks and authorship often goes unrecognized. By tracing the erasure of young black women from their own creative labor—even as their cultural output is virally disseminated online—Press Press collective members, including writer and restorative practices specialist Bilphena Yahwon, multidisciplinary artist and digital archivist Bomin Jeon, and graphic designer Valentina Cabezas advanced ethics of acknowledgement in contrast to the pervasive cultural amnesia of the digital sphere.

Designer and researcher Mindy Seu discussed her current work on the Cyberfeminist Catalog and its digital companion the Cyberfeminist Index, an open-source, open-access, and crowd-sourced online database documenting the development of cyberfeminism, with an emphasis on intersectional and non-Western definitions and practices. Emerging in the 1990s as a counterpoint to the exclusion of women from discussions of then-nascent internet, cyberfeminist thinkers embraced the liberatory potential of cyberspace as a vehicle for interrogating oppressive constructs of gender, sex, and race. By focusing on the global nature of the cyberfeminist movement, the Cyberfeminist Index provides a vital counterpoint to dominant Western-centric histories, foregrounding critical inflections across geographic regions.

The online program was accompanied by digital resources curated by the Cybernetics Library collective that expanded on the themes and histories of Cyberfeminist figures nominated for Wiki editing, as well as a virtual library of digital writings published by Press Press.

Participants of all gender identities and expressions were invited to watch the livestream of the artist talks join other editors online at Art+Feminism’s dedicated Slack channel {#onlineediting} for tips and discussion on Wikipedia editing throughout the afternoon.

PRESS PRESS is an interdisciplinary publishing initiative established in 2014. Press Press’s publishing practice is organized around two key goals: first, to shift and deepen the understanding of voices, identities, and narratives that have been suppressed or misrepresented by the mainstream, so far focusing on immigration and race in the United States; and second, to build networks of relationships through publishing practices centered on self-representation and gathering. Through an understanding of publishing as the act of gathering a public, Press Press’s streams of work include public cultural programming, an open-access publishing studio that’s based on an exchange economy, youth publishing workshops in an immigrant and refugee–only space, and the ongoing production of print and digital publications. Press Press operates out of a storefront studio and library in Baltimore, Maryland and a production space in Los Angeles, California.

MINDY SEU is a designer and researcher. She holds an MDes from Harvard’s Graduate School of Design and a BA in Design Media Arts from the University of California, Los Angeles. As a fellow at the Berkman Klein Center for the Internet and Society at Harvard Law School, she created an archive of cyberfeminism that spans three decades. She has also been a fellow at the Internet Archive, co-organizing the Arts Track of the inaugural Decentralized Web Summit. Formerly she was a designer on 2×4’s Interactive Media team and the Museum of Modern Art’s in-house design studio. She has given lectures and workshops at CalArts, Parsons, Pratt, RISD, Berkeley Art Museum, and A-B-Z-TXT, among others. Seu joined the faculty of California College of the Arts in 2016, and Rutger’s Mason Gross School of the Arts and Yale’s School of Art in 2019. At New Inc, she will continue to develop the Cyberfeminism Catalog, distributed as a printed publication and an open-access, open-source, crowd-sourced database.

THE CYBERNETICS LIBRARY is an interdisciplinary browsing library that re-contextualizes the expansive history of cybernetic thought and practice. Unexpected connections between art, technology, and society are facilitated from a contemporary vantage. The Cybernetics Library collects and re-codes texts and ideas across various fields of inquiry in order to reposition cybernetics as a generative approach to understanding how we are embedded in pervasive technological systems. Furthermore, the library considers issues of ethics and bias within technological systems, asking how we might create possibilities to critique and affect those systems. The Cybernetics Library is structured as a collective organization that builds upon its members’ wide-ranging research interests. Through its continually evolving collection and technological components, the library aims to generate feedback between publications, digital information, physical installations, and the readers themselves. 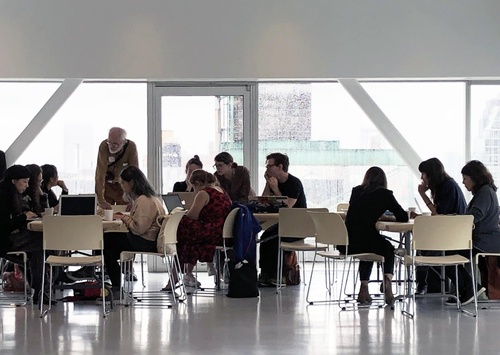